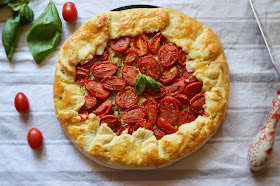 I love desserts. You know this, of course. Just take one look at this blog and you'll see that it's awash with cupcakes, cookies, brownies, bars, pies, tarts. That being said, I also very much like the idea of taking what is typically considered dessert and putting a savory spin on it. Last summer I made savory shortcakes with tomatoes, basil, and goat cheese whipped cream (shortcakes, mind you, are usually made with strawberries and sweetened whipped cream). After that I made a tomato cobbler (sweet cobblers usually look like this) then a tart made with zucchini and a galette with butternut squash and a waffle with prosciutto and cheese and an egg. The idea of savory cheesecakes and muffins and pancakes and ooh, french toast! are also intriguing (watch out, there's no stopping me now...)

Which brings me to this savory (not sweet!) crostata, which is basically Summer wrapped up in a pastry crust and served for lunch. Cherry tomatoes this time of year are as sweet as candy, and when roasted their flavor becomes even more intense -- so I knew I wanted to use those, and beside that cheese is never a bad idea, and then I thought well why not throw a little pesto in there for good measure? The result is a crostata filled with juicy flavorful cherry tomatoes, creamy mild ricotta, tangy goat cheese, and a layer of bright sunny basil pesto, wrapped up in a flaky, buttery crust and baked together happily in the oven, resulting in the perfection you see in the above photo. A slice or two of this crostata makes a perfect lunch for me, but you could also serve it as an appetizer if you wanted. It is good served warm, room temperature, or even cold the next day (if there are any leftovers, that is). Added bonus: This crostata is also substantial enough to serve to the vegetarians in your life who are used to being served lettuce as an alternative to the steak (though I'm sure that the carnivores will be wanting some of this, too).

A couple of notes: I put the pesto in a layer over the cheese filling, but if you want a more intense pesto flavor, you could always stir it into the ricotta and goat cheese. And speaking of pesto -- I used homemade pesto (recipe link below) because it takes two seconds to make and I am not a fan of the store-bought stuff, which tends to be a bit salty -- but if you're short on time a good quality one would probably work just fine. I used ricotta and goat cheese here, but you could also add in a little mozzarella or Parmesan if you wanted.This would be really pretty if you could get your hands on different colored cherry tomatoes (orange, yellow, and red!). Finally, if you don't have cherry tomatoes, you could use slices of whatever larger tomatoes you have on hand -- just make sure you sprinkle the slices with a little salt and leave them to sit for a bit to remove the excess water.

To make the dough: Whisk together the flour and salt in a large bowl. Sprinkle the cubes of butter over the dough and using a pastry blender (or your food processor, or you can just use your fingertips, if you don't have either of these things) cut it in until the mixture resembles coarse meal, with the biggest pieces of butter the size of tiny peas. In a small bowl, whisk together the yogurt, lemon juice and water and add this to the butter and flour mixture. With a wooden spoon, mix in the liquid in until a dough begins to form; be careful to not overwork the dough. If it seems too wet, add more flour a tablespoon at a time. Turn the dough out on to a floured work surface and form into a ball. Wrap in plastic wrap and refrigerate for at least one hour.

To make the filling: In a small bowl, mix together the olive oil, goat cheese and ricotta cheese. Season the cheese filling well with salt and pepper and set aside. Slice the cherry tomatoes in half and place in another bowl; blot with some paper towels to get off the extra moisture, then season with salt and pepper as well. Have your pesto, store-bought or otherwise, ready. 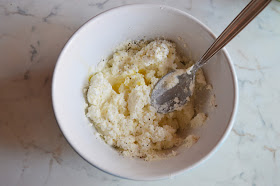 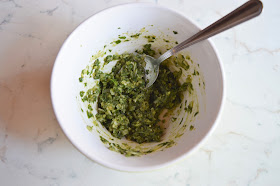 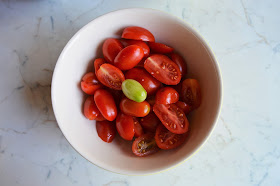 To assemble the crostata: Preheat the oven to 400 degrees. On a floured work surface, roll the dough out into a 12-inch round. 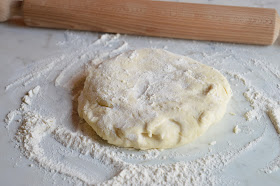 Transfer the crust an ungreased baking sheet lined with parchment paper (as you can see here I just rolled the crust over use the removable bottom of a tart pan, and moved everything to the baking sheet from there -- just an experiment to see if it would make things a little easier,which I think it did).

Spread the cheese mixture evenly over the bottom of the dough, leaving a 2-inch border. Spread the pesto over, and then arrange the tomatoes over the pesto, leaving a border. Gently fold the border of dough over the tomatoes (don't worry about making this too neat, as you can see I didn't -- any messiness here just looks "rustic"). 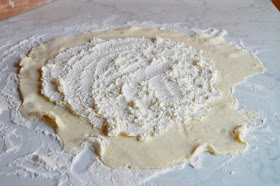 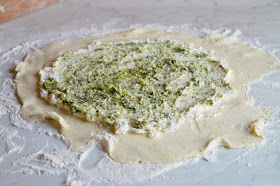 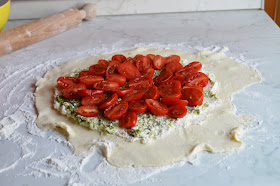 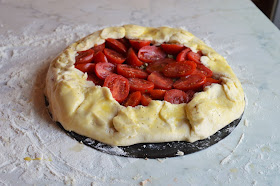 Drizzle the tomatoes with olive oil. Brush the crust with the beaten egg. Bake the crostata for 30-40 minutes, or until the tomatoes are juicy and the crust is golden brown. Let cool completely before serving. Serves 4-6. 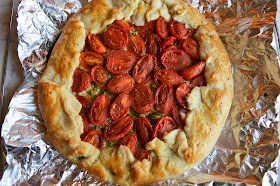 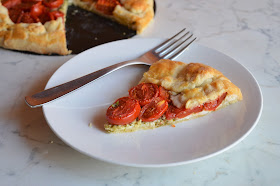